Skip to primary content
Skip to secondary content
Today is Columbus Day – and it seems as if it's popular to disrespect the day by just about everyone. People are hating on Columbus all over the place. I think it's due to the politically-correct mindset of the day – but there are probably many reasons.??
The fact is, it's a great story of discovery. There are many interesting things about Columbus' travels.
Such as:
???? ??The adversity he faced in garnering a voyage, a ship, a crew, etc.
???? ??How he got far off his course – and even till Columbus' death thought that he was in Asia rather than the??Caribbean.
???? ??And that's just a few…
??
But for some reason these days it's as if the person at the center of the holiday has to be some sort of perfect being – some sort of human who has never made mistakes or done anything controversial. And if that person has done some bad things, or made some controversial statements, then we throw the holiday right out the window and spit on it.
Lets not spit on Columbus!??
I think this is throwing the baby out with the bath water (if you will.)
Some people are against MLK day because he had a mistress and was thus a??hypocrite. Some people are against??Independence??day because some of the Founding Fathers had slaves or because of what happened to the natives, or for something else.??People are against Washington's Birthday because he was pro-slavery.??And people are against Columbus Day because he was pro slavery and had a condescending view of the Natives he discovered, or that he "brought" disease to Europe/New World (not true), or that he single-handedly invaded all of the New World himself and wiped out everything in sight (of course, not true).??
And that's fine for one not to like a??certain??holiday. We are free to not respect holidays if we want.??
And it's fine to not like the man, too. ??
As for me, I can respect the accomplishments of Columbus, and honor them, while at the same time realizing that he was a flawed individual and a man of his times and didn't do everything right. I can respect the accomplishments of the man, without endorsing every detail about his life.??
Just like i can honor MLK for the amazing things he did for race-relations in this country, or Washington for the unimaginable sacrifices he made, while realizing that neither of these men were perfect.??And that's alright with me.??
Moses wasn't perfect. He killed a man. Abraham wasn't perfect – he let his wife be taken by a king to save his own skin. David wasn't perfect – something about a thing with someone named Bathsheba. And the list could go on.
The thing is – it's alright to honor someone for something great they have done, even though they weren't perfect. Columbus did great things – he was one of the foremost navigators and explorers in history. It's thanks to him that Europe even knew there was land out here. That's kind of a big deal.
Perhaps you think Europe should never have found out about the "New World." Well, maybe not. But regardless, what Columbus did back in 1492 was a pretty big achievement. So lets remember it for what it is, ehh? He paved the way for all of our ancestors to come here. Why not honor that?
So here's to you, Columbus. Were you a perfect, flawless individual? No…and neither am I. But you certainly were more brave. There's no way I would be sailing uncharted seas on a wooden craft with a bunch of kooks. Here's to you. ?? 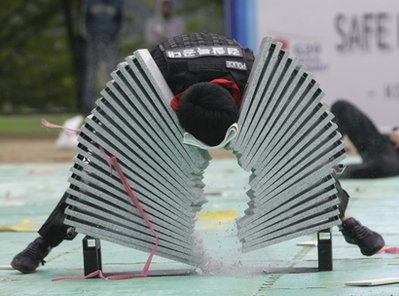 A South Korean policeman breaks stone plates with his head during a demonstration for a successful G20 Seoul Summit at a police training center in Seoul,??South Korea, Oct. 4, 2010.
I don't know how he did this, but i respect the headstrong in the world. This man seems to be one of them.