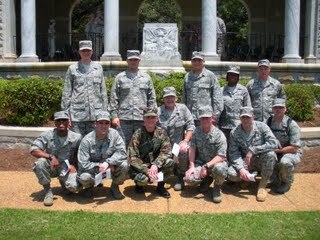 Me and my flight (FALCONS) at Andersonville National Cemetary

So it’s been a good time here at Robins AFB. We have been able to do a lot of amazing things.
We went to a flight line and saw some F-15’s. We toured a J-STAR aircraft. We checked out the honor guard and saw what they do…and they do incredible work. We went to Anderson, GA and toured the Civil War prison site and museum there. I was able to follow a chaplain around and get a lot of good stories and advice from him – which was extremely helpful.
One of my favorite moments was hearing from a former POW in the Vietnam war. He was a retired One-Star General and he was an amazing guy. He told us how he got shot down, captured, and then tortured and interrogated. He told us how he was able to stay focused and determined to make it out of there. He told us how it was when he turned to God and put the burdens he was carrying on Him that he was able to make it. His story was a lot better and more detailed than what i just relayed, but it brought tears to my eyes.
So many have sacrificed so much for our country.
Later that day we went to a Mennonite restaurant and ate there, which was incredible, and also heard their beliefs on Pacifism. That was hard to hear given that we just heard from a POW and all. But no matter how i feel about pacifism, it’s important to know and consider it.
So today we’re jumping on a C-130 and flying to Coco Beach, FL where we’ll be for a full week. It’ll be pretty nice. We’ll be busy, but it’ll be a lot of fun i am sure. The more i am getting familiar with chaplaincy the more i am both excited and daunted by it. I am looking forward to getting into it completely, despite how intimidating it is. Here’s to another week!